Chris is Managing Director and owner of Birds and Wildlife Limited, the company that now owns WildWings and is based in Surrey.

He is a highly experienced wildlife guide and over the last 20 years has led tours to a wide variety of destinations around the world including Antarctica, the Russian Far East, Brazilian Amazon, Mexico, New Zealand subantarctic islands and the West and Central Pacific and has seen over 5,500 species on his travels.

Having conceived the idea for the West Pacific Odyssey, Chris worked with Rodney Russ and the late John Brodie Good (WildWings founder) to set this trip up and has been on every subsequent sailing.

He is considered a leading expert on Pacific seabirds and has spent the equivalent of over three years at sea guiding groups looking for seabirds and marine mammals.  Indeed, during his marine travels, he has seen over 60 species of cetaceans (ie whales and dolphins) as well as the vast majority of the world’s seabirds.

Chris is also very much at home guiding trips elsewhere and one of his current personal favourite destinations is a tour he developed in the Amazon travelling from Manaus to Santarem where it is possible to see thirty species of primates and some very localised birds.

Chris has been on the Council of the Neotropical Bird Club for over 25 years and has been the charity's Treasurer since 1998. 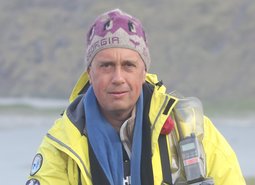 Chris Collins will be leading on the following tours...