Enjoy the immense beauty and stunning scenery of Svalbard on this Arctic expedition cruise looking for whales, walrus, seals, Polar Bears and millions of seabirds. Experience high summer in the Arctic with Ocean Atlantic - one of the few ice-class expedition ships built to withstand the High Arctic pack ice.

One of the goals of this expedition is to sail as close as possible to the edge of the pack ice north of Svalbard which is the Polar Bear´s favourite summer residence. How far north we go and the exact route will depend on the ice conditions. We will also visit several of the amazing locations along the west coast of Svalbard, all kept navigable by the Gulf Stream.

During the short summer, wildlife such as Reindeer and Arctic Fox are busy feeding up in advance of the icy polar winter and the cliffs are filled with breeding birds including Common, Brunnich's and Black Guillemots. We can also expect to see the diminutive Little Auk which unlike its larger relatives nests in boulder scree. On several of our landings, we hope to find the huge Atlantic Walrus which haul out on traditional beaches for the short Arctic summer. There are also various species of seals and whales we could encounter foraging along the edge of the pack ice and the coasts.

With a fleet of sturdy zodiacs (rubber inflatables), we have fantastic flexibility to watch wildlife at close proximity. The zodiacs allow us to have frequent shore landings and embark on exploratory mini 'zodiac cruises' in the fjords and glacial landscapes. 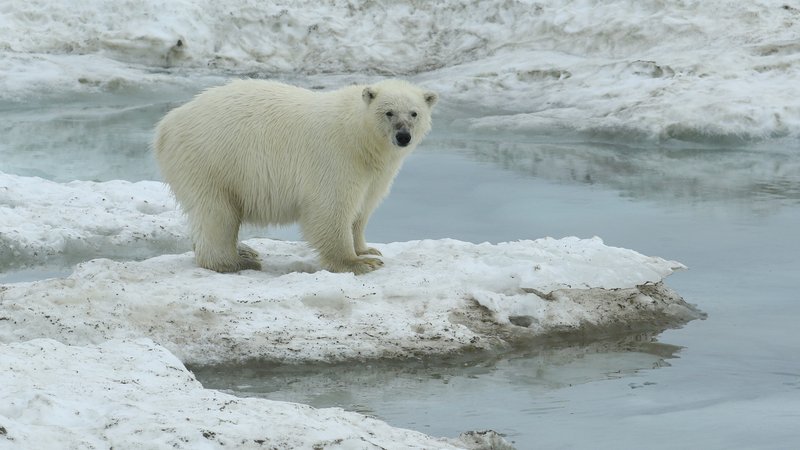 During this expedition to the High Arctic, we hope to find Polar Bears on the sea ice © Chris Collins

Arrive in Longyearbyen, Capital of Svalbard, arguably the northernmost ‘real’ town in the world.

Our vessel is docked close to the town centre and after boarding and a welcome drink, the Expedition Leader will provide information about the voyage, the ship's daily routines and the various security and safety procedures. Before sailing, there will be a mandatory safety drill. The Captain then takes the ship out of Advent Fjord and our Arctic adventure commences.

During the ‘night’ (what is night, when the sun never sets?), we pass Prins Karls Forland and arrive in the magnificent Krossfjord. Our visit to Svalbard is in the middle of the Arctic summer and at this time of year the birds are very active. June and July offers the best chances of seeing the millions of breeding seabirds and other migrant species. We plan to make a landing during the morning at Möllerhamna or in another suitable location. The majestic landscape around Regnardneset in the innermost area of Krossfjorden give us our first taste of what enticed the early explorers to these far northern lands.

In the afternoon, we continue further north and depending on the ice situation, we may do a zodiac cruise along the Lilliehöök Glacier fron or enjoy a lecture.

With some Arctic luck, we may be able to navigate past the magnificent scenery in the bay of Fjortende Juli, where the glacier Fjortende Juli-breen calves into the fjord. A fitting end to a day full of scenic views and Arctic wildlife.

We have now entered North West Svalbard, which was declared a national park in 1973. The day could begin with a cruise in Danskergattet, looking for seals in Virgohamna, before crossing from Danskøya to Amsterdamøya to make a landing at Smeerenburg, the legendary 17th century whaling town where 200+ men lived (and quite often died) in the heyday of the whaling period.

There are several interesting places to explore in this northwestern corner of Spitsbergen. If conditions allow we will make a landing on Ytre Norskøya where whalers would had their lookout posts.

During the morning, we plan to arrive and cruise slowly by the famous Alkefjellet. If the weather is on “our side”, we will have a good view of the steep cliffs. The whole area is home to a huge colony of Brünnich’s Guillemots. There are so many of the birds that hardly an inch of the cliffs is not occupied.

More wildlife awaits us as we land at the polar desert landscapes of Torrelnesset. The beach here is often home to a decent colony of Walrus which haul out to rest before they return to the sea to feed on the clams and any other molluscs that they can find in the shallows of Svalbard’s waters.

DAY 5: CRUISING TOWARDS THE PACK ICE AND SJUØYANE, POLAR BEAR COUNTRY AT 80 DEGREES AROUND EASTERN SVALBARD

During the night, the ship will head north towards the edge of the polar pack ice. How far north we are able to go only time and weather will tell, but the main target for us is just the ‘edge’, possibly at 80 degrees north! This is the kingdom of the Polar Bear! As the pack ice retreats during the summer, Polar Bears ride the floes north, as this is where their prey, the seals, reside. Bears who for unfortunate reasons do not ‘catch’ the ice moving north, are stranded on Svalbard all summer, and will have to survive on berries, eggs and whatever whale carcasses they can find. A hard life indeed!

During the day, lectures on polar mammals, environment and/or culture can be enjoyed on board in the Viking Theatre. Should we get into the pack ice where the sea usually is calm, our Captain will cruise slowly between the floes and look for wildlife.

One of our goals for the day is to reach the island of Nordaustlandet and hopefully its seven (or nine, depending on how you count) smaller islands in the far north of Svalbard. The almost vegetation-free, rocky islands are located around 1000 km north of mainland Norway’s famous Nordkapp.

Weather permitting, we will land and walk these most northern landmasses. The high Arctic islands are quite barren, only with moss and lichens covering the stones. The birdlife is rich in this area and some of the rarer gulls frequent these islands, so bring your binoculars.......

At the end of the day, we will start cruising towards the Liefdefjord and its landscapes which we will see tomorrow.

During the night, we head to Wood Fjord and its branch, the Liefde Fjord.  Our plan is to slowly cruise along the broad glacier front of Monacobreen. This gives a unique insight of the glacial forces and the unlimited forms of icebergs. The ice front is named after Albert I of Monaco, who was a major sponsor of Svalbard research.

Many trappers historically hunted and trapped in this area. Some of them stayed during the winter and built cabins. The cabin known as Texas Bar is said to be named after the US state of Texas and was built in 1927. We plan to visit the area around the cabin and enjoy the surrounding scenery.

Today we enter the beautiful Kongs Fjord known for the former mining settlement and simply being one of the most amazing fjord areas in all of Svalbard. Our first landing may be at Ny Ålesund. This settlement is actually north of Longyearbyen, arguably making it THE northernmost town but is a group of scientific stations, a post office and a single shop open for a few hours a real town...... You will have to judge for yourself.

The setting is, however, very nice, the scientific projects extremely interesting, and so is the town's history. The Captain will try to get alongside, so we can enjoy an easy walk through the area.

On the opposite side of the fjord, we can find the abandoned marble mining settlement Ny London. This has a short but hectic history, as the marble deposits allowed for an almost Klondike like 'marble rush'. War and failing financial viability meant the mines closed after just nine years and we can take a walk amongst the ruins of workshops, locomotives and cranes, testament to the great but failed investments.

We will then head south towards the entrance to Isfjord. On our way towards Longyearbyen, we hope to get our last glimpses of wildlife, as well as the truly unique landscapes of Svalbard.

Early in the morning the ship has returned to our starting point in Longyearbyen. After breakfast and farewell greetings to the Expedition Team and crew, disembarkation will take place. Transfer is arranged to the airport.

Please note that all the excursions and landings rely on weather, sea and ice conditions being favourable both for the ship to access the areas and also for the zodiacs to safely navigate.

For this reason, should the weather and condition be unsuitable, the ship has excellent public areas, such as wellness/sauna, restaurant, bar and a library for passengers to spend their spare time.

The ship is staffed by experts who will offer informative lectures anging from exploration history to biology, geology, ice and wildlife and they will also escort you ashore and on zodiac cruises.

The prices listed above include all discounts.

TO CHECK AVAILABILITY AND BOOK PLEASE CONTACT THE WILDWINGS OFFICE.

NB: As applies to all expedition cruises, the exact itinerary will be subject to weather, ice and local conditions. All landings are subject to government and other permissions. 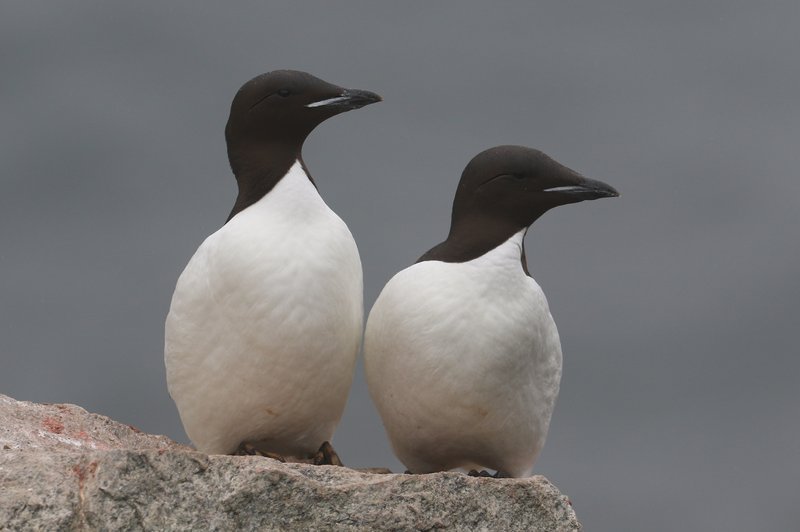 Ocean Atlantic is the perfect vessel for expedition cruising in Antarctic waters! Renovated in 2016 and with an international ice class rating of 1B, she is one of the strongest ships operating in the Arctic. Her high maneuverability, shallow draft and strong engines allow for extended voyages into isolated fjords.

Ocean Atlantic has elegant common areas and accommodation for 198 passengers. The ship was built in 1985 and underwent an extensive rebuild in 2010. With a length of 140m, she has ample space on the multiple decks for several lecture halls, a relaxed restaurant serving 4-star international cuisine, professionally staffed bars and observation platforms and even a pool!

All private staterooms are stylishly appointed and feature private facilities, phones for internal calls, individual temperature controls and a TV. Ideal for relaxation, the vessels’ accommodation ranges in size from 11 - 35 m2 and have either portholes or windows.

Daily shore landings are made possible by her fleet of 20 zodiacs. 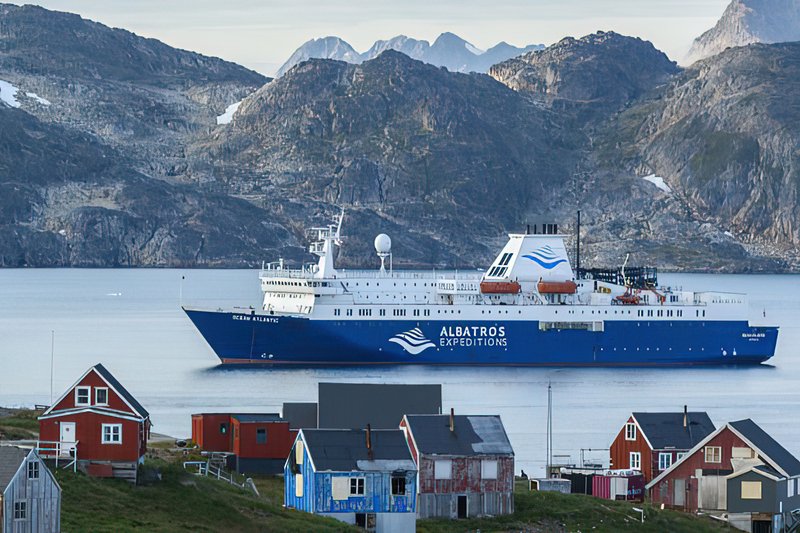