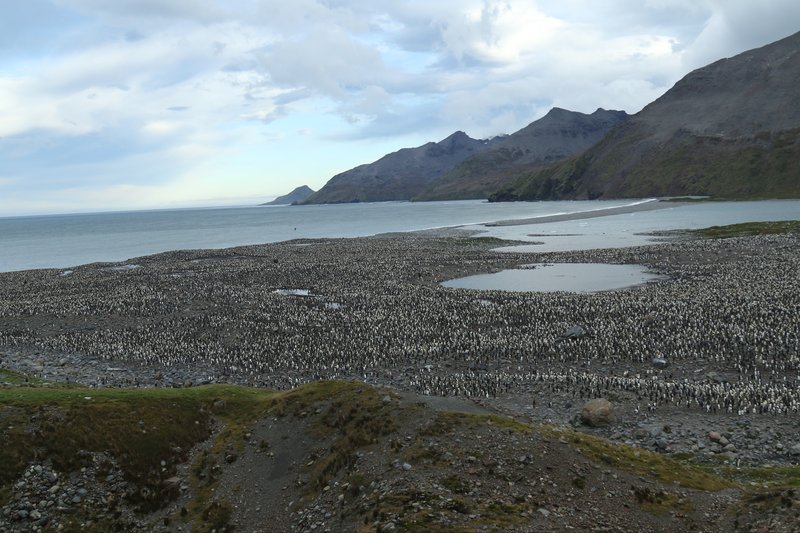 A cruise to the Falkland Islands, South Georgia and Antarctic Peninsula is an incredible and truly life-changing experience combining the "Great White Continent" with two very different but equally amazing subantarctic islands.

WildWings has been working with Oceanwide Expeditions for many years and have assisted many clients in experiencing the wonders of this region on their ships.

For an overview of this amazing region, please click here.

Day 1: Embark in Ushuaia and sail

Your voyage begins in the southernmost city on Earth, Ushuaia, in the very south of Argentina. Located in the province of Tierra del Fuego, the town is often referred to as “The End of the World”.

During the afternoon, you will embark your expedition ship and in the evening sail down the highly scenic Beagle Channel. Fringed by snow-capped mountains, this will be the first opportunity to see a range of species with Black-browed Albatrosses, Southern Giant Petrels, South American Terns and Imperial Cormorants all likely. Approximately two hours after leaving Ushuaia, the ship will pass a colony of Magellanic Penguins (on the northern/Argentinian bank) so be sure to be out on deck at this point !!

The ship will be at sea all day and there are likely to be some compulsory briefings about safety and the rules which visitors to Antarctica need to follow (plus optional lectures) but there will be plenty to see outside with chances for our first "Great Albatrosses" (Wandering and Northern/Southern Royal) of the expedition.

Both Wilson's and Black-bellied Storm Petrels are likely and we could also find Sooty Shearwaters, Common Diving Petrels, as well as Cape, Blue and White-chinned Petrels.

The Falkland Islands are home to an abundance of wildlife and our first day is likely to be spent exploring at least one site in West Falkland.

There are numerous options for landings with the possibilities including Carcass Island which, despite the name, is actually rodent-free and thus home to a good variety and number of birds. As well as breeding Magellanic and Gentoo Penguins, the endemic Cobb's Wren can be found here, a species which is now almost entirely restricted to small predator-free islands.

Another possibility is a visit to Saunders Island where there is a Black-browed Albatross colony as well as breeding Imperial Cormorants and both Rockhopper and Gentoo Penguins.

On both of these islands we can also expect to see Striated Caracara, a species which is reasonably numerous here but now extremely endangered on mainland South America.

Port Stanley is the capital of the Falklands and is home to a population of about 2,000 people. With some Victorian-era charm, colourful houses, well-tended gardens, English-style pubs and a small but interesting museum, it is a fascinating place to explore.

For those interested in birds, a walk along the waterfront is definitely worthwhile with good chances of finding the endemic Falkland Steamer Duck. Whilst this species is flightless, the similar looking Flying Steamer Duck can also be present.

The journey from the Falkland Islands to South Georgia takes a couple of days and for anyone interested in seabirds and marine mammals, this is invariably a very special experience with a fantastic range of possible species.

Both Southern and Northern Giant Petrels are also highly likely to be following the ship during this transit and amongst the smaller species, both Wilson’s and Black-bellied Storm Petrels are regular, as are Antarctic, Slender-billed and Fairy Prions. Other possibilities include Southern Fulmar, Cape, Soft-plumaged, Blue and White-chinned Petrels and, if we are fortunate, a Greater Shearwater or Kerguelen Petrel.

At some point during the journey, the ship will cross the Antarctic Convergence which is where the water temperature drops considerably over just a few hours. As well as being a great place for seabirds, this boundary can be a fantastic place for marine mammals, and we could find Fin and Humpback Whales with occasional sightings of Blue Whale, Southern Right Whale and other cetaceans.

We have four days scheduled on the incredible island of South Georgia. Over 100 miles long and with a spectacular chain of snow-capped peaks running down the spine of the island and some vast glaciers, South Georgia is not only amazing for wildlife but also incredibly scenic.

There are multitude of potential landing sites and your Expedition Leader will do their best to ensure you enjoy some of South Georgia's special highlights, however, it is also important to be looking for wildlife as the ship moves between landing sites as species such as Macaroni Penguin and the gorgeous Light-mantled Sooty Albatross are more often seen at sea than when ashore.

It is important to appreciate that weather conditions in this area can be challenging and this will largely dictate the programme of activities but possible landing sites could include:

Fortuna Bay – This beautiful outwash plain is home to a large number of King Penguins and fur seals. Here you may have the chance to follow the final leg of Shackleton’s route to the abandoned whaling village of Stromness.

Salisbury Plain, St. Andrew's Bay, Gold Harbour – These sites are not only where the three largest King Penguin colonies in South Georgia are located but are also three of the breeding beaches with the highest numbers of Antarctic Fur Seals anywhere in the world as literally millions of individuals come ashore to breed during the austral summer.

There may also be some subadult Southern Elephant Seals, as well as this season's "weaners" which are abandoned by their mothers when they are only a couple of months old.

These sites are also places where South Georgia's two endemics, the South Georgia Pintail and South Georgia Pipit, can be found in reasonable numbers, however, following the recent rodent eradication programme, both species are considerably commoner than a decade ago and can now be seen at many locations.

Prion Island – This location is closed during the early part of the Wandering Albatross breeding season (November – early January). From January onwards, however, the breeding adults are sitting on eggs or nursing their chicks so visits are sometimes possible.

Grytviken – this is the administrative capital of South Georgia and all expedition ships are required to visit, however, it is a fascinating place to explore with an abandoned whaling station, museum, shop and a small cemetery which includes the grave of the great Antarctic explorer, Sir Ernest Shackleton.

In the afternoon of day 10 and depending on the conditions, we will start sailing southwards in the direction of the South Orkney Islands.

Day 11: At sea and southward bound

Any day at sea in the Southern Ocean is going to be an incredible experience for anyone interested in seabirds and as the ship heads in a southwesterly direction, there are likely to be further chances for many of the species which were possible on the transit from the Falkland Islands to South Georgia. As the ship reaches lower latitudes, several more southerly species become possible and these could include Snow Petrel which sometimes fly in the flocks of Cape Petrels that often follow the ship for hours at a time.

Depending on the conditions, you may visit Orcadas Base, an Argentine scientific station on Laurie Island in the South Orkney archipelago. The personnel here will happily show you their facility, where you can enjoy expansive views of the surrounding glaciers. If a visit isn’t possible, an alternative option may be a landing at Shingle Cove on Coronation Island.

Day 13: At sea and last push to Antarctica

As the ship gets closer to Antarctica, we are likely to start seeing more and more icebergs and there is a decent chance of potentially encountering a Fin Whale. This transit is also likely to be the one with the best chance of finding Antarctic Petrel, although the numbers of this tricky species seem to vary from trip to trip. One thing is certain, however, that there will not be a dull moment as we near Antarctica.

If the ice conditions permit, we hope to sail into the Weddell Sea where there can be colossal tabular icebergs which have broken off the iceshelfs far to our south.

If we are able to get into the Weddell Sea, one possible landing is Paulet Island where there is a large colony of Adélie Penguins. Another option is a visit to Brown Bluff which is located in the ice-clogged Antarctic Sound and, again, there are vast numbers of Adélie Penguins. This landing site is on the Antarctic Continent and, for many people, this is thus an opportunity to set foot on their last continent.....

If conditions aren’t favourable for entering the Weddell Sea, the ship may set a course for Elephant Island and head into the Bransfield Strait which separates the South Shetland Islands and Antarctic Peninsula. Here it is possible to access the Antarctic Sound and Weddell Sea from the northwest, however, there are a multitude of other options including landings in the South Shetland Islands (where we may be able to visit a colony of Chinstrap Penguins) or head further south into the Gerlache Strait to sites such as Neko Harbour, the Lemaire Channel or Port Lockroy.

The time of our northbound departure will be determined by the anticipated conditions in the Drake Passage.

Named after the Elizabethan privateer, Sir Francis Drake, the Drake Passage will be our final opportunity to look for seabirds and cetaceans and whilst these waters are notorious for their rough seas, most crossings are generally reasonably smooth.

Many of the seabirds we are likely to have already seen should be present and as we get closer to the tip of South America, we have some of our highest chances of species such as Southern and Northern Royal Albatrosses.

If the conditions are kind, there are also chances for a wide range of cetaceans and whilst Fin Whale is probably the most likely, Blue Whale, Southern Bottlenose Whale and Strap-toothed Beaked Whale can occur although considerable luck is needed to see any of these species.

At some point on day 18, the South American coastline will come into view and species such as South American Tern, Imperial Cormorant and Sooty Shearwater are once again likely to be amongst the more numerous species.

Every adventure must, unfortunately, eventually come to an end and during the night the ship is likely to go alongside at the wharf in Ushuaia and after breakfast you will be able to disembark after what will have been an incredible adventure. 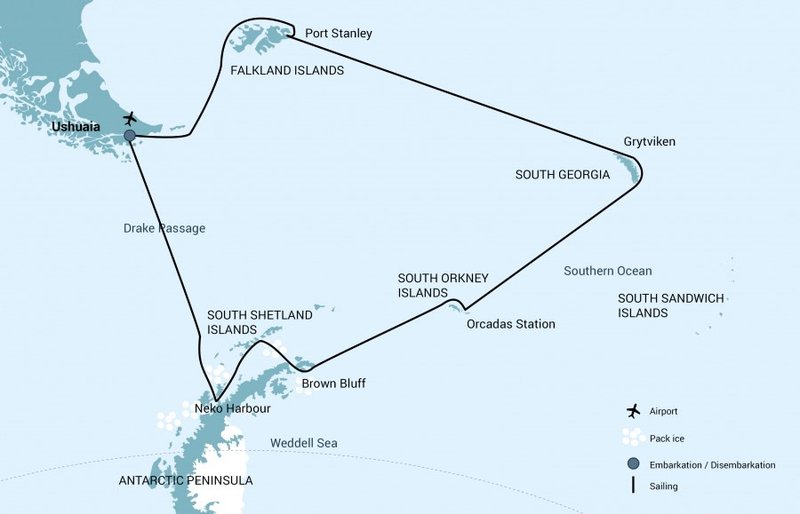 All itineraries are for guidance only as the programme will depend on ice, weather, and wildlife conditions. Landings are subject to site availabilities, permissions, and environmental concerns per IAATO (the 'International Association of Antarctic Tour Operators') Regulations.

Official sailing plans and landing slots are scheduled with IAATO prior to the start of the season, but the Expedition Leader determines the final plan. Flexibility is paramount for all expedition cruises.

Please note that for all expedition cruises, WildWings is acting as agent for the ship operator and you will need to sign up to their terms and conditions.